This is my last analysis of Superstorm Sandy as it is now weakening at a steady clip and although it will continue to affect many along the interior Mid-Atlantic area, it is becoming less and less of a threat. Sandy should be done with us by Thursday and impacts from now on should be much less severe.

Sandy has caused damage in the 10’s of billions of dollars according to Jeff Masters of Weather Underground. This will really not do to much to help the economy and will likely set us back quite a bit. This could most definately affect the presidential election.

Sandy is now weakening over Central PA and will continue to spin north and weaken even more as it moves into Canada. Impacts will be wrapping up and the rainfall should slow down considerably as pressures rise and winds fall. We should be completely done with Sandy by Friday.

From now on, I will expirement with making a graphic every Wednesday evening and posting it here. This might work well or it might not. We will see. My first one will be tomorrow evening. Here is one for tonight.

The NYC area felt major impacts from surge as water covered the LGA airport and winds gusted well over hurricane force at JFK. Meanwhile, the defenses put in place at the last minute by the MTA were no match for Sandy’s surge and service will be suspended for the remainder of the week as all major lines are flooded according to the MTA. Also there is a stunning video of the Brooklyn Battery tunnel with water pouring in. Cars were bobbing around like rubber duckies in lower Manhattan. FDR drive was underwater at LOW tide so forget about high tide.

The Atlantic City area felt major impacts as well as Sandy roared ashore in Southern NJ. Large chunks of the boardwalk were washed away by Sandy’s monster surge.

Even up un Maine, Extensive flooding cut off Wells to Wells beach for a few hours near mid-night last night. Also, latest estimates have 83,200 customers without power in ME according to CMP (Central Maine Power)

Now this is crunch time. The center of circulation is bearing down on the NJ coast and the winds are picking up here in Maine.

Rain is now moving into the Detroit area now and is continuing steadily in most of the mid-atlantic states.

Forecasts are now holding steady and true (see posts below) and so I will not elaborate too much here.

Hunker down and stay safe!

The new NHC advisory is out and Sandy has strengthened like I forecast yesterday to 85mph, 946mb and is moving N now at 15 mph. This is the beginning of the inward hook towards the coast. Winds and rain will be affecting most of the eastern third of the country by this evening.

Now it is time for the analysis. What exactly is happening? Where is the heaviest rain? Where are the strongest winds? Where is Sandy located? All is answered below.

This has changed only very slightly from at 5 and at 2. The movement has increased slightly and the pressure has loweres a hair to 950 flat. This is down 1 mb from 2PM. This is slight strenghening and we sould expect a more rapid deepening trand as the warm core system moves over the Gulf Stram packing 80 degrees+ SST’s. This will quickly add a core wind speed of 10mph give or take a little and increase to 80-85mph by Monday Morning as it passes.

This may seem a bit overwhelming at first but it is just some pretty simple stuff under-cover. The lower left hand box is the moisture in the high levels of the atmosphere (35,000 feet). The moisture from Sandy is clearly visible streaming northward. The dry air that has been pertruding into Sandy’s eastern side is also clearly visible to her S and SE. The main photo is the winds from this altitude. I drew a black line where the approximate jet stream location is. The purple letters are “H” for ridge and “L” for upper level low/trough. Sandy is the ULL off the east coast and the centeral US trough is also shown.

This trough will inject a considerable amout of energy into the system and help to deepen it to a formidible 945mb low or lower just prior to landfall Monday evening. This will easily smash the records of 960, 955mb that have stood for centuries.

The winds between 5000 and 10000 feet will be absolutely howling as Sandy makes landfall as shown by this model plot.

This will be cause for major problems due to the convection firing on the western side of this storm will have the oppertunity to mix down down some of these winds to the surface creating quite a problem for the metropolis’. This is done by basically deflecting the winds like a light and a mirror by the downdraft pushing the winds down to the surface. Also, the high rises will be extra suseptable with winds increasing exponentially as you go up so that some of the tippy tops of the NYC sky-scrapers will be experiencing winds of CAT 5 intensity.

This is from this afternoon showing an 11′ water rise at the battery in Lower Manhattan which would flood out the subways. 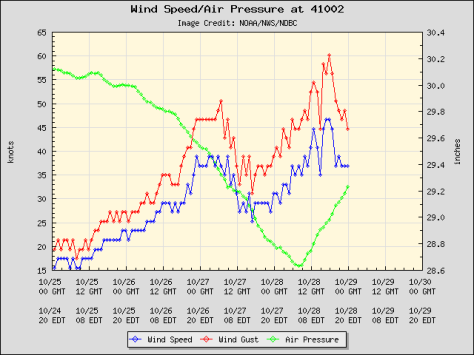 Bouy data from SE of Cape Hatteras is shown above 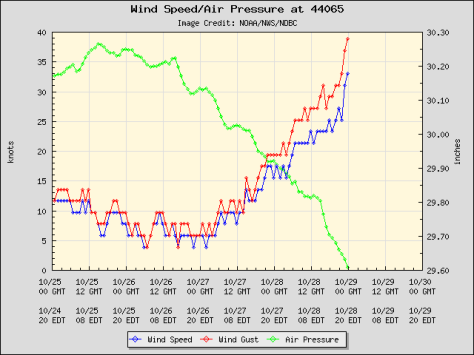 Bouy data from New York Harbor is shown above 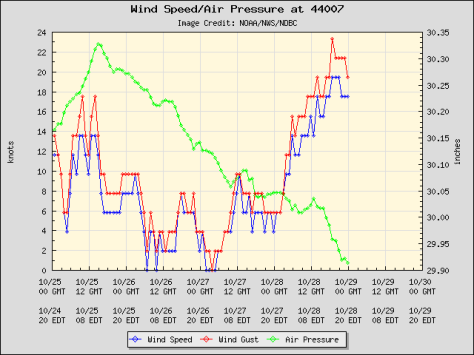 Bouy data from just off of Portland ME is shown above

Bouy data from off the Jersey Shore is shown above

Rainfall and inland flooding will be of great concern with rivers in VA already above flood stage prompting warnings. Amounts are as following: 10-12″ for NJ and easten PA as well as MD locally higher. 4-8″ For anywhere North of an Ocean City to Pittsburg line and South of a Pittsburg-NYC line. 1-2″ for areas north of Wilmington to Cleveland all the way over to Bangor Maine.

The 2PM intermediate advisory has come out now and there are very few changes from before. The winds and pressure have stayed the same while the forward motion has increased to 14mph. There is also some new bouy data to show. I will feature 4 bouys. 1 off of Cape Hatteras, one in New York Harbor, one in the Gulf Of Maine, and one off the Jersey coast. 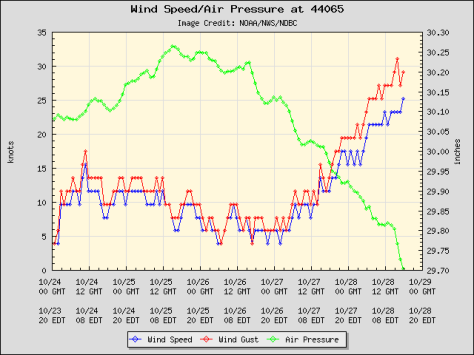 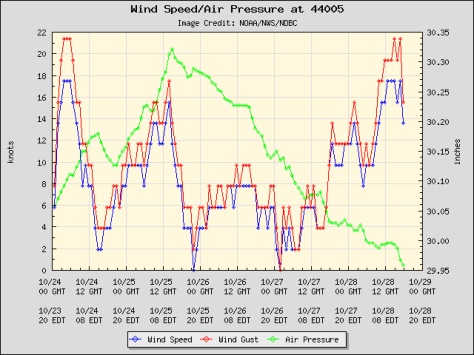 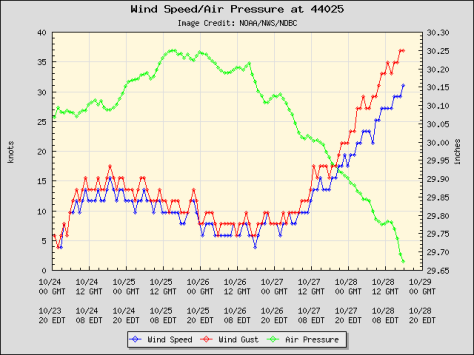 Bouy 44025 off the Jersey coast.
Enjoy the data! I will make a new post with updated bouy data/new advisories at around 8 or 9 tonight.
-Jack