Today will feature mainly sunny skies with the exception of up north where partly cloudy skies will dominate as another cold front moves through. Expect falling temps as the front passes and gusty winds but no precip is expected outside of the mountains. Highs will be in the low to mid 30’s north and the upper 30’s to low 40’s south.

Hello everyone and Happy Thanksgiving!

In addition to turkey eating, football, and not-shopping, today will feature mainly cloudy skies but with warmer temps as warm air is pushed into the region on the backside of record strong high pressure. Temps will top out in the lower 40’s north and the upper 40’s south.

Today will feature mainly sunny skies, cool temps, and lighter winds. Highs will range from the mid-upper 30’s up north to the mid 40’s south.

Today will feature sunny skies, chilly temps, and a stiff NW wind to make those chilly temps feel even chillier. Sound like yesterday? That’s because there is a strong resemblance in the forecast. The only difference will be that winds today will be slightly lighter. Temps will range from the upper 20’s north to the upper 30’s south.

Today will feature early morning snow being replaced by flurries then eventually clearing skies as NW winds bring in colder, and drier, air. Most areas should see at least some sun by sunset. Temps will range from the upper 20’s north to mid 30’s south. NW winds will likely be gusty with gusts up to 25mph possible.

Rain is already spreading across the area this afternoon as a plume of moisture moves north. The immediate coastline and the inland portion of the midcoast is currently seeing light to moderate rain and this will continue through the evening with rain slowly expanding NW.  Light to moderate rain should continue throughout most of the early part of the night mainly east of the Turnpike.

The main feature of this storm will be a sharp gradient on the back side of the system with 5 or 10 miles making up the difference between a few sprinkles and a half inch of rain ending as an inch of snow. As a result, the forecast is especially touchy for areas west of the Midcoast where 1-4″ is likely depending on elevation. Once you get to the I-295/I-95 corridor, a very sharp dropoff in snow totals is likely with some areas seeing up to 2″ and others but a few midnight flakes.

All precip, rain or snow, comes to an end early tomorrow morning with everyone west of I-95 dry by sunup and everyone else soon thereafter. The rest of tomorrow looks cool but nice with clearing skies and NW winds bringing in cooler and drier air.

Every storm has a surprise and by virtue of surprises, they largely remain unknown but if there was one place I had to guess there would be a surprise, it’s where there’s been one already. There were indications that the trough at the 500mb level would be negatively tilted with this storm for days. Finally, the surface forecasts caught up to that and in the past 24 hours the forecast has gone from ‘chance of a flurry midcoast’ to ‘many people get their first accumulating snow’. This trend has smoothed out with the afternoon guidance today but don’t be surprised if this thing comes a tad farther west and instead of a dusting, you end up with 2″ of snow. After all, it would really only take 25 miles to make that big of a difference for some.

The other, equally possible surprise is that the same cold NW winds bringing in the cold air to change things over to snow also come with enough dry air to shut off the precip early, especially because NW winds downslope off the mountains which dries the air even more. For a full explanation of downsloping in relation to temperature, check out my neat weather tidbit from a few weeks ago. While that post talks specifically about temperature, the same principle applies to moisture in that when air rises, moisture condenses and forms clouds/precip etc. just like it cools and when it sinks, the opposite happens. The post also includes a general overview on downsloping which applies to this forecast.

While the last two paragraphs could reasonably be perceived as me covering myself in case the forecast goes wrong, my hope is that in case it does, you can at least know why. As I’ve said several times, part of my goal here is to educate you about why weather happens as well as to tell you what’s likely to happen. 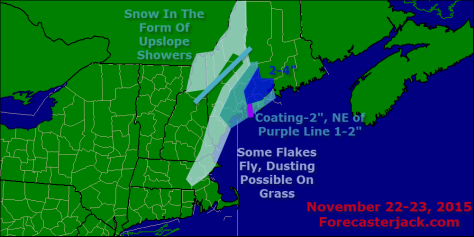 Speaking of what’s likely to happen, here’s a look at how much snow to expect when all is said and done. All in all, not a big deal but it still will be nice to see the flakes flying in November.

I’ll have another update on tomorrow’s weather in the morning.

A weird update schedule today as I wanted to get a quick update out there this morning for today but also wanted to go into more detail on tonight’s storm. Therefore, I’ll have this update and then another one later this morning or at some point this afternoon with full details on tonight’s snow event.

A mainly cloudy day is expected today as one area of low pressure moves by to our north and another to our east. The one to our north is bringing some light freezing rain/snow to northern areas this morning but that should be moving out in the next few hours.

The bigger story will be the low to our east which is moving up the coast and looks to bring some rain changing to snow over coastal and eastern areas this afternoon. Rain should move onto the immediate coast (east of route 1) south of Portland by 1 or so this afternoon spreading up the coast and remaining mostly east of I-95 through the evening. Rain does look to change to snow at some point this evening, I’ll have another update with more details on that later today as well as the first snow map of the 2015-2016 season.

Today looks to be a split one with the first half being wet and windy as a cold front keeps moving through.  This will clear out west to east mid-late morning leaving cloudy but warm conditions. Downsloping west/northwest winds will likely accomplish at least some clearing by sundown SE of the mountains.

A quick update this evening on tonight’s upcoming rain event.

A pretty straightforward forecast this evening as a cold front is moving in from the west. Expect rain to spread across the area west to east in the next few hours with steadier and heavier rain arriving after midnight and lasting through midmorning tomorrow. A general .75-1.5″ is likely with a bit more in the favorable upslope areas up to 2 or so inches. Winds will likely be gusty as well much more so east  with gusts along the coast north of Portland likely reaching the 25-30mph range with lesser gusts inland.

Rain and wind winds down tomorrow afternoon with some clearing expected as well. I’ll have more details on the rest of tomorrow’s forecast tomorrow morning.

On a slightly different note, this upcoming week is Thanksgiving vacation for me so while I’ll still have updates, they may appear slightly later in the morning. Also, the three weeks between Thanksgiving vacation and Christmas vacation are a notorious end of the semester academic pinch point so while morning updates should remain unaffected, there will likely not be enough time in the evening for an update should inclement weather be moving in. If there is indeed any major storm, I’ll have evening updates but other than that, I’ll stick to morning updates until January. Thank you very much for your continued support, it means a lot!