Our bone-chilling cold is going nowhere today as NW winds continue to bring us a fresh supply of air directly from the Arctic Circle. 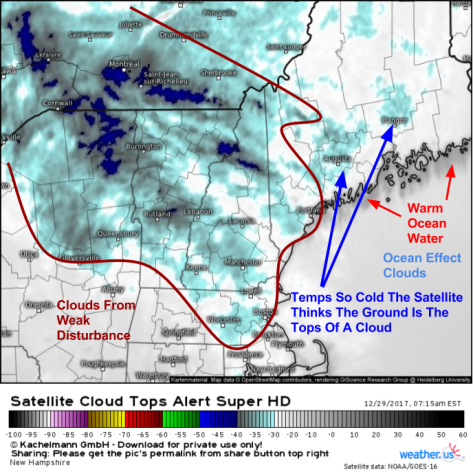 High Definition satellite imagery shows a couple of really neat features that are important to our forecast today. First, we have some clouds filtering into the region from the west. These are associated with a weak disturbance that will bring light snow to parts of the area today. It has hardly any moisture associated with it, but because the air is so cold, we don’t need that much moisture to produce snow. Speaking of cold air, if you look at satellite loops you’ll find that there are some areas of light blue that don’t move. These aren’t persistent areas of low clouds, they’re actually patches of ground so cold the satellite thinks they’re the tops of clouds! Temperatures in these areas are below -30C which is -22F. The darker colors just off the coast represent warmer temperatures (see color scale) associated with ocean waters that are, compared to the rest of the area, quite warm. You can also see ocean effect clouds develop as our Arctic airmass continues to pour SE over the warm ocean waters. Pretty neat stuff!

As for the forecast, that satellite image just about sums it up. It’ll be very cold and we’ll have a fair bit of cloud cover due to that disturbance, which will also be responsible for bringing us some snow. High temps today will actually be a hint warmer than yesterday, ranging from 5 below in the north to 5 above in the south. Winds will die down a little bit today, but dangerous wind chills well below zero will continue for the entire area. Skies will feature a mix of sun and clouds, with clouds taking over across much of the area by this afternoon. Snow will break out around midday in New Hampshire and spread east into Maine early in the afternoon. Snow will generally be light, and accumulations are likely to fall in the C-2″ range as there will be barely any moisture associated with the system. Snow will clear out this evening.